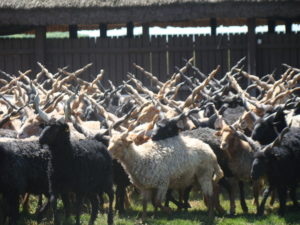 The ancestral Hungarian herding dog which later became the Puli, appears to have migrated with the Magyars and their livestock from the Ural-Altay region, between China and the Caspian Sea, to the Carpathian Basin around 800 AD. This dog most likely can be traced back to the herding/guard dogs (Tsang Apso, mistakenly called Tibetan Terriers by Europeans) originating from China and Tibet and were widespread in that region. The ancestral Puli mixed with French and German herding dogs around 300 years ago, as a result of two-way trading of livestock trading between Hungary with France and Germany. Livestock was then driven on hoof to their destination and naturally the shepherds used their herding dogs to perform the necessary chores around the flocks of sheep and herds of cattle. Some accidental or perhaps even intended matings between the respective parties’ dogs took place as their paths crossed on the roads and markets of Europe. From the German side the contributors to the creation of Pumi were the Pomeranian Schafpudel (Sheep Poodle, still in existence today in small numbers) and the Hütespitz (Herding Spitz) which was considered extinct as of 1935. Both these ancient breeds were known since at least the Middle Ages. The Pumi’s name is believed to reflect the origin of its German genetic contributors. 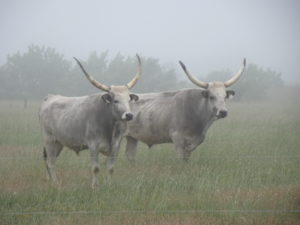 Our present day Pumi (Pumik in plural) is the result of centuries of selection by shepherds. The selection was directed towards performing tasks which were based on the uniqueness of the environment and the livestock in the Carpathian Basin. The Hungarian livestock, such as the Hungarian Grey Cattle and the Racka sheep are very hardy and originally lived off the land in a semi-wild state. Their temperament matched their environment. There were no huge contiguous pastures, but many smaller ones, which were accessible only by narrow roads, through woods, cultivated fields and strip parcels.

There was a need for a fast, spirited, decisive dog, capable of completing a task independently; one who is perfectly capable of assessing the given situation and to make decisions – correctly – because of its strong desire to please. It’s not afraid to get close to livestock, but at the same time is absolutely trustworthy not to damage the livestock; quick learner to the point of seemingly reading its owner’s mind. Dogs that didn’t fulfill these requirements were not bred.

In many cases the livestock owners didn’t even own pastures, or theirs was too small to sustain all their livestock. Consequently, they had to rent pastures which could be miles away. They had to drive their livestock every day over narrow roads, strips of land, and if possible, had to avoid causing damage to the adjacent properties. Here the dogs didn’t have the opportunity for outruns in wide arcs, because there was no room. Often they had to go ahead between the livestock’s feet to their front to turn or to stop the flock. The dog had to be able to protect a cornfield immediately on the side of the road from the flock, specifically it had to “patrol” – move back and forth between the sheep and the cornfield to prevent the animals from going into the crop. As a result, the sheep got accustomed to the fact that when the dog is close, it’s working. There was a need for a dog which likes to work close and is not afraid of livestock. The Pumi’s tools were barking, quick movement, and an occasional nip if needed. The Pumi also guarded the farm and alerted its owners when strange people or animals approached. 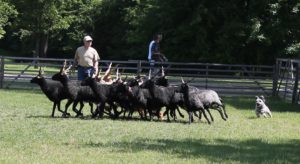 In the early twentieth century, the Hungarians identified three distinct herding breeds based on phenotype. The Puli was identified first, being prevalent on the eastern Hungarian plains. The Pumi was next; found more in the hilly country of western Hungary; and the Mudi (which carries more of the characteristics of one of its ancestors, Hütespitz) the last, from southern Hungary. The Pumi was considered a regional variation of the Puli and the two names were used interchangeably for centuries.
Dr. Emil Raitsits, a professor at the Hungarian University of Veterinary Medicine, initiated the standardization of Puli and Pumi in the 1910’s and 1920’s. The Pumi standard was approved by FCI in 1935.

More good information from a Hungarian website (in English) at http://pumikennel.hu/?p=1448.

We're currently offline. Send us an email and we'll get back to you, asap.

Copyright © 2021 Hungarian Pumi Club of America, Inc., unless otherwise noted. Content and photography cannot be reprinted, redistributed, or otherwise used without written permission from the HPCA or the copyright holder. Information published on this website may contain personal and professional opinions and experiences and is provided for general interest and guidance only. The information is provided with the understanding that the authors and the HPCA are not rendering legal, ethical or other professional advice and services. The opinions expressed are the authors’ own and not necessarily those of the Hungarian Pumi Club of America, Inc., Information on this website should not be used as a substitute for consultation with your own professional advisors.